I can’t sit through most zombie movies because of the suspense factor (violence and gore I can take — I love action movies —  just not the “gulat” / surprise factor). I dislike them so much that someone once took me to see Dawn of the Dead under the pretext of watching a “romantic comedy” as a prank. (The worst part is, that movie actually starts off like a love story before the title credits start rolling… Punk’d.)

Smartly written, tongue-in-cheek zombie flicks like Zombieland and Shaun of the Dead have helped me slowly get over my aversion to the genre… Maybe I’ll eventually get around to watching AMC’s Walking Dead. Baby steps.

2) Marla, the lady I jokingly refer to as my most successful long distance relationship ever

Marla is the beauty + brains behind New Slang, Grade School for Yuppies, and Natural Selection Design Co. She’s also one of the most talented, creative, and giving people I know. We met 9 years ago and the laughs and “mind melds” have not stopped coming since — never mind that we’ve lived in separate countries 90% of the time since then (yes, the romance was mostly epistolary).

This piece was the product of a cross-continental conversation we started documenting for NaNoWriMo back in 2008. We nicknamed our collaboration Marla and Jo’s Infinite Playlist, a nod to a movie that came out that year, which similarly covered relationships with music as the backdrop. Our literary playlist was mostly the rants and raves of two girls in their early twenties, and I love looking back on what we wrote and seeing how much has changed and remained the same since those days.

I always wanted to illustrate this particular piece and five years later, I’m finally bringing her creation to life (no pun intended)! What makes it sweeter is that Marla is now happily married to a man who is the opposite of an undead creature. (She and her husband Joel were the ones who attended the Jason Magbanua design talk with me– they positively radiate inner peace and happiness!)

Bottom line: There is a lesson to be learned from everyone who walks (slash trudges) into our lives.

For those of you out there who are battling your own inner demons and ZRP (Zombies of Relationships Past), know that you are not alone. At the very least, you can always make good art** about your experiences. 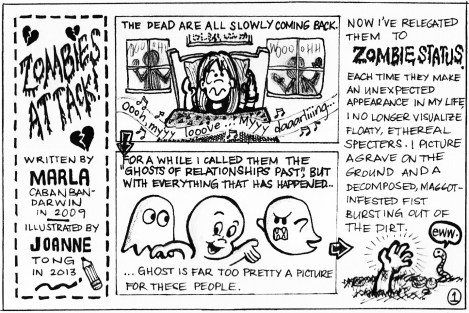 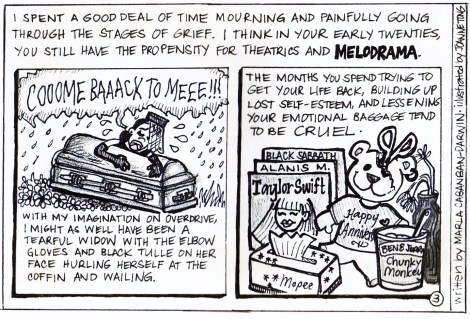 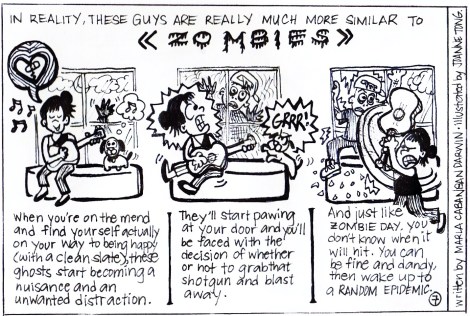 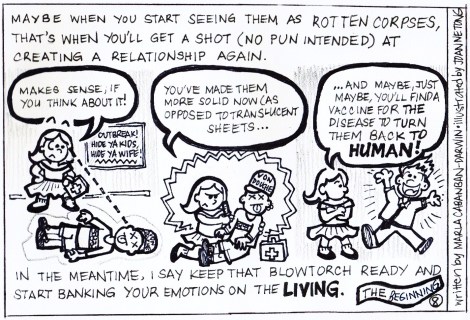 *All right, I’m actually a month late for Valentine’s Day. I missed my February milestone for drawing and posting this entry…  Luckily, East Asia (China, Taiwan, Korea, Japan) celebrates “V-Day Part Deux” on March 14! (Apparently, people who receive presents from their significant others on February 14 are expected to return the favor the following month. Bonus: People traditionally give white chocolate instead of dark chocolate on this day — my kind of holiday!)

** As Neil Gaiman said at a commencement speech (soon to be turned into a book):

“Life is sometimes hard. Things go wrong, in life and in love and in business and in friendship and in health and in all the other ways that life can go wrong. And when things get tough, this is what you should do.

Make it on the good days too.”